Blair Thomas is one of the lucky ones.

The former Penn State running back recalled coach Joe Paterno telling him he’d never play in Happy Valley again if he repeated a fumble he made during a pre-practice warm-up his freshman year.

Taking it in stride, the future second overall NFL draft pick learned to secure the ball by carrying it around his dorm room day and night. But the pressures of playing such a prominent position at a national football powerhouse in the 1980s could have had an adverse affect.

“There were a lot of guys that did go through some mental issues, but that was a time when it was taboo to talk about it,” Thomas, a special guest at Wednesday’s Bo Tkach Under the Helmet and Hat Foundation golf tournament, said. “We had a sports psychologist at Penn State, but I’ll be honest, I didn’t pay much attention to it. It wasn’t until I started coaching after my NFL career and I would see a kid who looked down or depressed that I would just stop and ask them how they’re doing. Not everyone is going to just come right out and talk about it so if you can take a minute and be there, be that comfort for someone, it can make all the difference.”

Wednesday marked the 15th annual golf tournament, held this year at Woodstone Country Club in Danielsville, for the foundation, which Jim and Sandi Tkach started after their son Bo took his own life in 2007.

The foundation raises awareness of obsessive compulsive disorder and mental health issues; funds various youth programs for the betterment of children in the community; and provides scholarship awards to deserving students who possess the ideals that Bo possessed.

“Everybody is affected by mental health, people just don’t like to talk about,” Jaime Mendes, foundation board member and PenTeleData vice president of operations, said. “It’s hard to believe we’ve been doing this tournament for 15 years. When we started it, we didn’t know how long it would go but it’s wonderful to still be here raising this money for a great cause.” 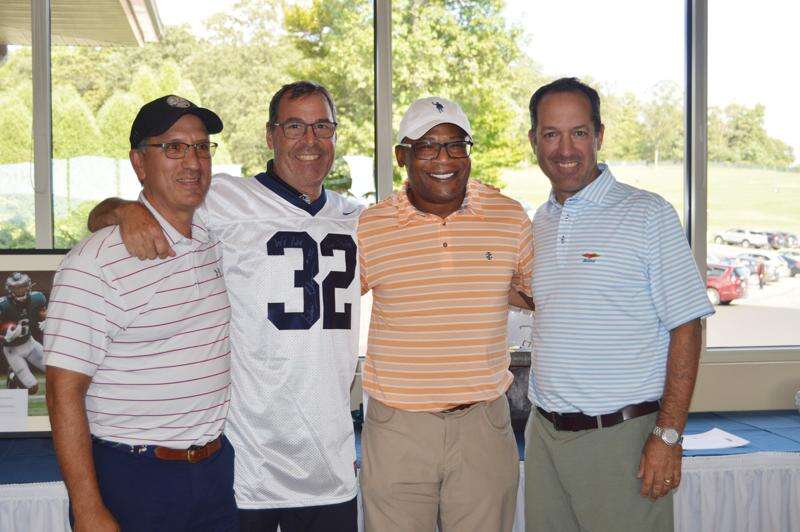 The team of Jeff Hager, Frank Hager Jr., Frank Johannes and Chris Hager won the tournament with a score of 59.

Thomas also played Woodstone, which he described as a beautiful course.

“This isn’t the first time I’ve played it and it’s a Class A place for sure,” he said. “I really enjoyed coming back here. The sunset just hits different over this place. It’s beautiful.”

Beyond his words, Thomas aided the foundation by signing numerous Penn State items including jerseys and footballs, which were later auctioned off to raise additional funds.

After a seven season NFL career that included stints with the Jets, Cowboys, Patriots and Panthers, Thomas served as running backs coach at Temple University for eight seasons, from 1998–2005.

“When I was at Temple, I had an open door policy as a coach,” Thomas said. “Whether it’s bipolar disorder or any mental issue, so many people are affected. The one thing I learned is you have to listen because you don’t know what you don’t know.”

Bo’s brother Tyler read a few words from Jim and Sandi, who were not able to make it up from their home in Delaware for Wednesday’s tournament.

“Thank you for helping us fight this battle,” Tyler said. “This is a battle that, as you know, is often misunderstood and can’t always be seen. Your generosity has helped contribute to over 275 presentations across the country hopefully leading to a better awareness of mental health issues.”